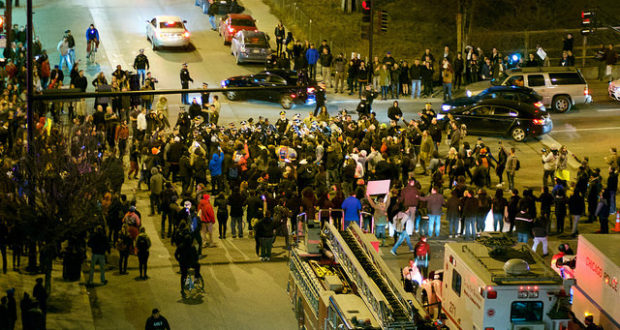 Following the US presidential election, half of a deeply divided nation has struggled to process its candidate’s surprising loss.  Without any constructive recourse following the decisive results, many have wandered into the streets to protest the election.

That is their right to exercise free speech.  America was built on protests.  Most famously, the Boston Tea Party in 1773 led to the American Revolution which founded this nation.  Free speech is the backbone of the United States’ creation.

Years later, in 1963 the March on Washington included Martin Luther King’s peaceful but forceful “I have a Dream” speech at the foot of the Lincoln Memorial.  That moment paved the way for the just Civil Rights Act and the Voting Rights Act.

More recently, in 2011 Occupy Wall Street protesters squatted in New York City.  The occupy movement against social and economic inequality worldwide was largely disorganized and ineffective but mostly peaceful and garnered a lot of media coverage.

Now let’s review the difference between protests and riots.

For the most part protests are good.  Riots are bad.

People are killed or injured in riots.  Property is stolen or damaged in riots.  Riots are humanity at its worst.

1968 saw Chicago erupt at the Democratic National Convention.  Heavy police forces clashed with many seeking change and protesting the Vietnam War.  Political protests can turn ugly in a divided America.

In 1992 Los Angeles nearly burned to the ground in riots following the acquittal of four LAPD officers in Rodney King beating trial.  The violence that ensued killed 53 people, injured 3000 more and damaged $1 billion of property.

In 2014, violent riots spread throughout Ferguson, Missouri when an unarmed black teen was shot and killed by white police officer.  Witness accounts vary as to whether the teen was surrendering or charging the officer.

Let’s all take a deep breath and reflect for a moment that we are not only from the same country but, more importantly, we are all children of the same God.  Brother and sister.  Side by side.  Let’s take some time and pray for our country and each other.  Let’s pray for our leaders.  And let’s pray that protests remain peaceful.

Previous: World Leaders and the Will of God
Next: Giving Thanks