Most five year old boys woke up in America today wondering which cereal they would have for breakfast. Maybe Lucky Charms or Frosted Flakes.

Most five year old boys in America sat on a couch this morning while their moms poured that bowl of cereal for them.

Most five year old boys in America were too busy to make their breakfast because they were frantically pushing buttons on a TV remote control searching for the latest episode of SpongeBob SquarePants or Dora the Explorer.

Most five year old boys in America had a busy day playing with their toys, being chauffeured to a playdate, petting their dog or harassing their cat.

Most five year old boys in America filed a protest with their moms when it was a time to take a nap in their private bedrooms on their comfortable twin mattress covered in cotton sheets and soft pillows.

Most five year old boys in America played late into the afternoon until triumphantly greeting their dad when he walked in the door after a hard day’s work.

Most five year old boys in America had a parent read an exciting episode of Dr. Seuss or Three Little Pigs to them before getting tucked into bed for a night of adventurous dreams.

A five year old Syrian boy named Omran Daqneesh does not know where he will sleep tonight. He does not know when he will eat his next meal. He does not understand why he is bleeding from the forehead or why he is covered in dust from head to toe. He does not know why his apartment in Aleppo, Syria was just bombed to rubble in an air strike on his home. Nor does he probably know five other children died in his building. Perhaps they were his playmates. 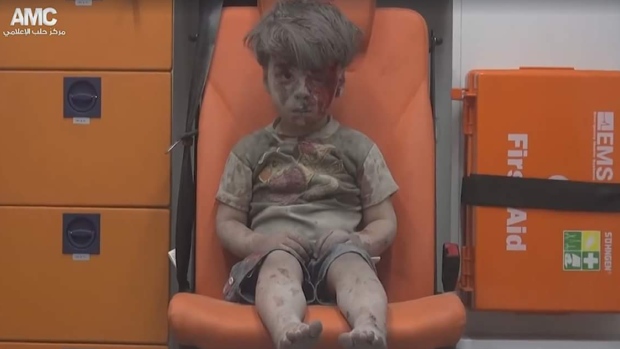 You probably know Omran thanks to the internet and social media. We’ve seen the soul-shaking images of this battered little boy sitting on an orange seat inside an ambulance, looking dazed and confused, surely having no clue about the Syrian civil war surrounding him. Surely he does not know about President Bashar Assad, ISIS, terrorism, or why Russian and American planes drop bombs in his country. Frankly, most educated adults would be hard-pressed to explain these things to Omran. It’s complicated.

What’s not complicated is Jesus’ love for Omran. It’s possible Omran will be raised in a faith that does not know Jesus. But the Lord loves him just as much as any five year old boy in the world.

For those that live in the comfortable confides of the west, it is easy to compartmentalize the horrific daily events in the Middle East as events we just see on the news. Those things happen “over-there” in some faraway place on the other side of the world. It’s not our reality. But for Omran and millions of others like him, his life is besieged by the daily purgatory of war. Now, for children like him the fear of war is as real as an episode of SpongeBob.

As Christians we owe it to ourselves to be aware of these horrible events. At the very least, we must include people like Omran in our daily prayers. Ask Jesus to hold Omran in His arms and comfort him like you would for your child. Imagine Omran embraced in the light of Christ. Imagine a tear falling from Jesus’ cheek onto Omran’s check, cleansing the dust of war from his tiny innocent face. Then go back and hug your child and give thanks.

Previous: St. Catherine of Siena
Next: The Pope We Need